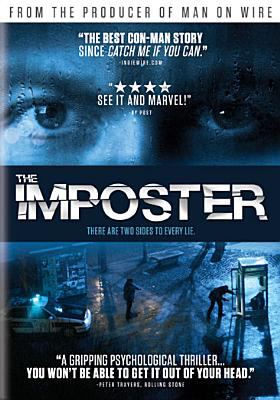 ( DVD
)
by
Universal City, Calif. : Distributed by Vivendi Entertainment, c2012.  |   Widescreen. |   1 videodisc (99 min.) : sd., col. ; 4 3/4 in.  |   B008IG09FO
Videodisc release of the 2012 motion picture.
Special features: Making The imposter ; Trailer ; unlock actual government cast files with QR code inside.
Vivendi Entertainment: ID8156.
Directors of photography, Erik Wilson, Lynda Hall ; editor, Andrew Hulme ; music, Anne Nikitin.
Frédéric Bourdin, Adam O'Brian, Carey Gibson, Anna Ruben.
In 1994, a thirteen-year-old boy disappeared without a trace from San Antonio, Texas. Three-and-a-half years later, he is found alive and well thousands of miles away in Spain. He tells a story of kidnap and torture when he returns. While his family is excited to bring him home, all is not quite as it seems. Is the boy really who he claims to be, or is he an imposter giving the family false hope for their child's return?
DVD format.
No public performance rights purchased ; home, library, or classroom use only.
Closed-captioned.