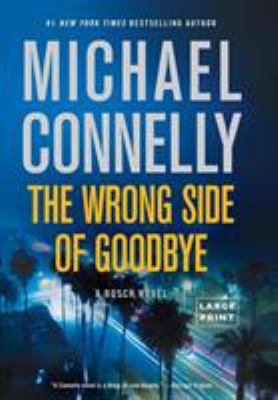 The wrong side of goodbye : a novel

( Large Print Book
)
by Connelly, Michael, 1956-
New York : Little, Brown and Company, 2016.  |   First edition, large print edition. |   550 pages.  |   0316396753  |   9780316396752
Soon one of Southern California's biggest moguls comes calling. The reclusive billionaire is nearing the end of his life and is haunted by one regret. When he was young, he had a relationship with a Mexican girl, his great love. But soon after becoming pregnant, she disappeared. Did she have the baby? And if so, what happened to it? Desperate to know whether he has an heir, the dying magnate hires Bosch, the only person he can trust. With such a vast fortune at stake, Harry realizes that his mission could be risky not only for himself but for the one he's seeking. But as he begins to uncover the haunting story, and finds uncanny links to his own past, he knows he cannot rest until he finds the truth.