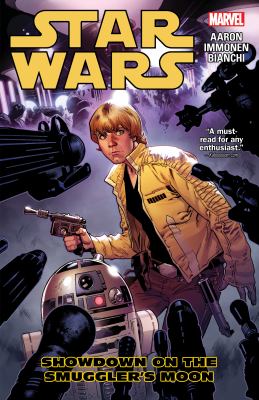 Showdown on the smuggler's moon

( Book
)
by Aaron, Jason.
New York : Marvel Worldwide, [2016]  |
At head of title: Star wars.
"Contains material originally published in magazine form as Star wars #7-12."
Based on the Star wars films.
Luke Skywalker is imprisoned on Coruscant. Han and Leia are confronted by the Imperials, set upon them by a mysterious woman from Han's past. And, Ben Kenobi contemplates revealing his true identity in order to fight the villainous scum that have run rampant on Tatooine.
T.