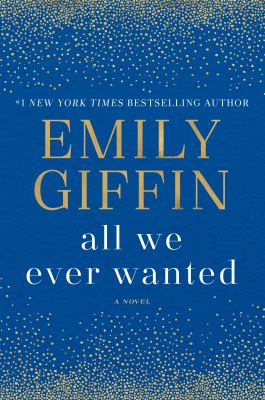 All we ever wanted : a novel

( Book
)
by Giffin, Emily.
[Toronto] : Doubleday Canada, [2018]  |
Nina Browning married a third-generation Nashvillian, enjoys a newly lavish lifestyle thanks to the sudden success of her husband's tech business, and has a son, Finch, who just got accepted to Princeton. Thomas Talone is a single dad, works multiple jobs and has a daughter, Lila, who was recently accepted to Nashville's most prestigious private high school on a scholarship. They couldn't be prouder. Then scandal strikes, and the worlds of these very different families collide. Lila passes out at a party, drunk and half-naked. Finch snaps a picture, types out a caption and click--sends it out to a few friends. The photo spreads quickly, and soon heated reactions bubble throughout the already-divided community. Before long, the families find themselves in the midst of an ethical war as their community takes sides, throws blame and implodes. The gray area between right and wrong grows thick, and Nina and Tom are forced to question every assumption they've held about love and family loyalty. Emily Giffin tells a riveting story of characters who face impossible choices--but emerge to live a life truer to themselves than they ever had before.