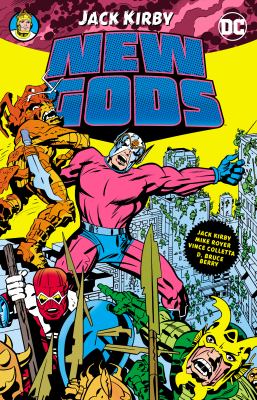 "New Gods and Fourth World created by Jack Kirby."
"Originally published in single magazine form in The New Gods 1-11, New Gods (reprint series) 1-6, DC Graphic Novel No. 4: the Hunger Dogs and Who's Who: the Definitive Directory of the DC Universe 3, 6, 8, 10, 12-13, 16-17 and 22"--Title page verso.
"NEW GODS, the cornerstone of Jack Kirby's early 1970s "Fourth World" line of comics, is collected in its entirety in a single trade paperback. In 1971, following his move from Marvel Comics to DC, writer/artist Jack Kirby unleashed the "Fourth World" comics -- four interconnected series. The centerpiece of these titles was NEW GODS, which introduced the warring worlds of Apokolips, ruled by the dread Darkseid, and New Genesis, led by the philosophical Highfather. A sprawling cast of characters was led by Orion, son of Darkseid, raised on New Genesis as a savage warrior on a world of peace. And while Darkseid scoured the Earth in search of the deadly Anti-Life Equation, Orion battled his minions Kalibak, Canto and others, with the help of his New Genesis allies Lightray, Metron and others"--Provided by publisher.