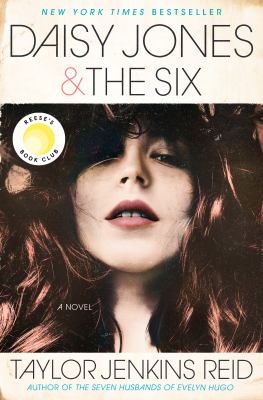 Daisy Jones & the Six : a novel

( Book
)
by Reid, Taylor Jenkins.
New York : Ballantine Books, [2019]  |   First edition. |   355 pages  |   1524798622  |   9781524798628
"Reese's book club"--Cover.
A gripping novel about the whirlwind rise of a world-famous 1970s rock group and their beautiful lead singer--and the secret reasons behind their dramatic break up. Daisy Jones is a beautiful, broken girl growing up in L.A. with rich parents who barely know she exists.... But when she sings in a crowded, smoky club, you can hear a pin drop. All she wants is to write her own songs, but the record studio has its own ideas. It's the early 1970s and free love and drugs are everywhere, and Daisy wants to experience it all. Billy Dunne and his brother have a band called The Six that won't be playing weddings for long. They are ambitious, hard-rocking, hard-partying. When they land a record deal, Billy's girlfriend follows them to the west coast and life begins. But she finds out she's pregnant on the eve of their first tour, and the pressure of fatherhood and incipient fame make Billy go a little crazy on the road. Daisy and Billy's paths cross when a manager realizes that the key to skyrocketing success is to put them together. But oil and water don't even begin to describe how they mix.... And what happens next will become the stuff of legend. Written in the style of an "as-told-to" rock autobiography, Daisy Jones & The Six is an unforgettable ride.