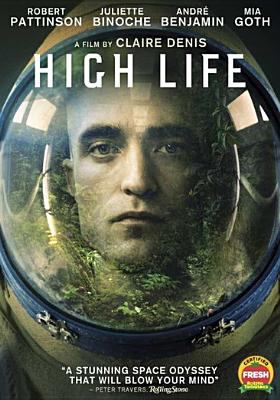 Title from web page.
Originally released as a motion picture in 2018.
Wide screen.
Special features: Audacious, passionalte and dangerous: Making of featurette; VIsualizing the abyss: The look of High Life.
Robert Pattinson, Juliette Binoche, Andre Benjamin, Mia Goth, Lars Eidinger, Agata Buzek, Claire Tran.
Monte and his baby daughter are the last survivors of a damned and dangerous mission to deep space. The crew, death row inmates led by a doctor with sinister motives, has vanished. As the mystery of what happened onboard the ship is unraveled, father and daughter must rely on each other to survive as they hurtle toward the oblivion of a black hole.
CHV Rating: 18A.
Rating: R; for disturbing sexual and violent content including sexual assault, graphic nudity, and for language.
DVD, wide screen; Dolby digital 5.1.
Home use only.
English dialogue; Spanish subtitles; subtitled for the deaf and hard of hearing (SDH).