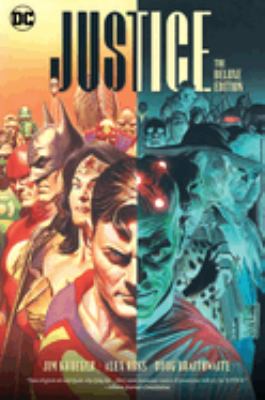 ( Book
)
by Krueger, Jim.
Burbank, CA : DC Comics, [2019]  |
"Superman created by Jerry Siegel and Joe Shuster, by special arrangement with the Jerry Siegel family".
"Originally published in single magazine form in Justice 1-12".
"The greatest criminal masterminds of our time appear to be acting in concert -- but with a surprising plan that seeks to achieve more good than the JLA ever could. They are the World's Greatest Super-Heroes. But the members of the fabled Justice League of America are about to learn they aren't the only ones who can band together toward a common goal. The greatest supervillains the world has ever known are working together as one - with a shocking goal that will have the people of earth singing their praises! But it's just the latest attempt at world domination - and our heroes are there to expose the truth, to fight...for Justice!"--Provided by publisher.