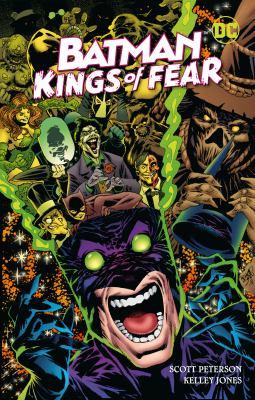 ( Book
)
by Peterson, Scott, 1968-
Burbank, CA : DC Comics, [2019]  |
"Batman created by Bob Kane with Bill Finger".
"Originally published in single magazine form in Batman: Kings of Fear 1-6."
"There's nothing to fear but fear itself--unless, of course, the Scarecrow is involved. After years of psychological and emotional torment, Batman is pushed over the edge. Batman succumbs to his one true master. Fear. Legendary artist Kelley Jones (Batman, Deadman, The Sandman) makes his triumphant return to the Dark Knight in this explosive miniseries written by former Batman editor Scott Peterson! Batman's been overseeing Gotham City for years now and isn't sure how much of a difference he's making. Doubt, fear and insecurity are starting to take over. And as all of those negative feelings set in the Scarecrow orchestrates a riot at Arkham Asylum to give the Dark Knight one of his greatest challenges yet!"--Provided by publisher.