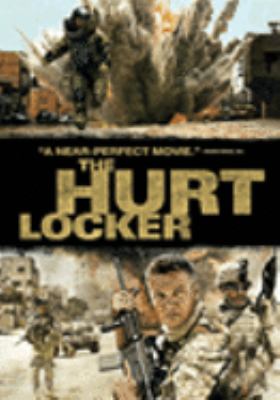 ( DVD
)
by
[Canada] : Summit Entertainment, c2010.  |   [Widescreen ed.] |   1 videodisc (131 min.) : sd., col. ; 4 3/4 in.  |   B002UXYD2Q
Director of photography, Barry Ackroyd ; editors, Bob Murawski, Chris Innis ; music, Marco Beltrami, Buck Sanders.
Jeremy Renner, Anthony Mackie, Brian Geraghty, Evangeline Lily, Ralph Fiennes, David Morse, Guy Pearce.
US Army Staff Sergeant Will James, Sergeant J.T. Sanborn and Specialist Owen Eldridge comprise the Bravo Company's bomb disposal unit stationed in Baghdad. James is the tech team leader. When James arrives on the scene, Bravo Company has thirty-nine days left on its current deployment. It will be a long thirty-nine days for Sanborn and Eldridge whose styles do not mesh with their new leader. James' thrill of the dismantlement seems to be the ultimate goal regardless of the safety of his fellow team members, others on the scene or himself. On the other hand, Sanborn is by the books: he knows his place and duty and trusts others in the army to carry out theirs as well as he. Eldridge is an insecure soldier who is constantly worried that an error or misjudgment on his part will lead to the death of an innocent civilian or a military colleague. While the three members face their own internal issues, they have to be aware of any person at the bomb sites, some of who may be bombers themselves.
MPAA rating: R; for war violence and language.